Suppose the observational study described in the previous section were carried out, and researchers determined that the percentage succeeding with the combination drug/therapy method was highest, while the percentage succeeding with neither therapy nor drugs was lowest. In other words, suppose there is clear evidence of an association between method used and success rate. Could they then conclude that the combination drug/therapy method causes success more than using neither therapy nor a drug?

It is at precisely this point that we confront the underlying weakness of most observational studies: some members of the sample have opted for certain values of the explanatory variable (method of quitting), while others have opted for other values. It could be that those individuals may be different in additional ways that would also play a role in the response of interest. For instance, suppose women are more likely to choose certain methods to quit, and suppose women in general tend to quit more successfully than men. The data would make it appear that the method itself were responsible for success, whereas in truth it may just be that being female is the reason for success. We can express this scenario in terms of the key variables involved. 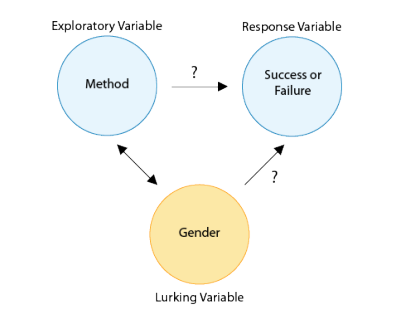 We could control for the lurking variable “gender” by studying women and men separately. Then, if both women and men who chose one method have higher success rates than those opting for another method, we would be closer to producing evidence of causation.

The diagram above demonstrates how straightforward it is to control for the lurking variable gender by modifying your study design.

Notice that we did not claim that controlling for gender would allow us to make a definite claim of causation, only that we would be closer to establishing a causal connection. This is due to the fact that other lurking variables may also be involved, such as the level of the participants’ desire to quit. Specifically, those who have chosen to use the drug/therapy method may already be the ones who are most determined to succeed, while those who have chosen to quit without investing in drugs or therapy may, from the outset, be less committed to quitting. The following diagram illustrates this scenario. 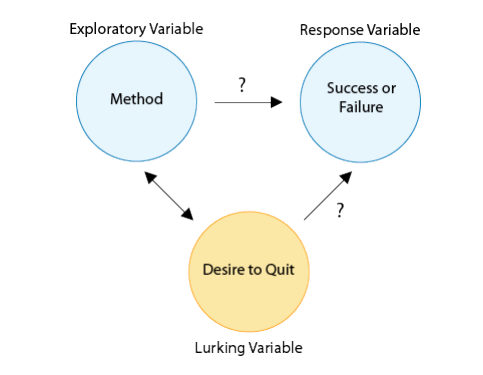 To attempt to control for this lurking variable, we could interview the individuals at the outset in order to rate their desire to quit on a scale of 1 (weakest) to 5 (strongest) and study the relationship between method and success separately for each of the five groups. But desire to quit is obviously a very subjective thing, difficult to assign a specific number to. Realistically, we may be unable to effectively control for the lurking variable “desire to quit”.

Furthermore, who’s to say that gender and/or desire to quit are the only lurking variables involved? There may be other subtle differences among individuals who choose one of the four various methods that researchers fail to imagine as they attempt to control for possible lurking variables. For example, smokers who opt to quit using neither therapy nor drugs may tend to be in a lower income bracket than those who opt for (and can afford) drugs and/or therapy. Perhaps smokers in a lower income bracket also tend to be less successful in quitting because more of their family members and co-workers smoke. Thus, socioeconomic status is yet another possible lurking variable in the relationship between cessation method and success rate.

It is because of the existence of a virtually unlimited number of potential lurking variables that we can never be 100% certain of a claim of causation based on an observational study. On the other hand, observational studies are an extremely common tool used by researchers to attempt to draw conclusions about causal connections. Thus, when great care must be taken to control for the most likely lurking variables (and to avoid other pitfalls which we will discuss presently), then researchers may assert that an observational study suggests that the association may be causal (not that it is causal).

So far we have discussed different ways in which data can be used to explore the relationship (or association) between two variables. When we explore the relationship between two variables, there is often a temptation to conclude from the observed relationship that changes in the explanatory variable cause changes in the response variable. In other words, you might be tempted to interpret the observed association as causation. The purpose of this part of the course is to convince you that this kind of interpretation is often wrong! The motto of this section is one of the most fundamental principles of this course:

Association does not imply causation!

The scatterplot below illustrates how the number of firefighters sent to fires (X) is related to the amount of damage caused by fires (Y) in a certain city. 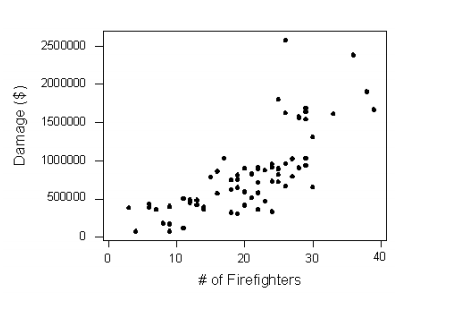 The scatterplot clearly displays a fairly strong (slightly curved) positive relationship between the two variables. Would it, then, be reasonable to conclude that sending more firefighters to a fire causes more damage, or that the city should send fewer firefighters to a fire in order to decrease the amount of damage done by the fire? Of course not! So what is going on here?

There is a third variable in the background—the seriousness of the fire—that is responsible for the observed relationship. More serious fires require more firefighters and also cause more damage.

The following figure will help you visualize this situation: 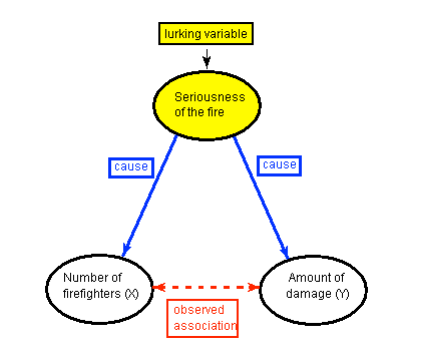 Confounding is a major threat to the validity of inferences made about statistical associations. In the case of a confounding variable, the observed association with the response variable should be attributed to the confounder rather than the explanatory variable. In science, we test for confounders by including these “3rd variables” in our statistical models that may explain the association of interest. In other words, we want to demonstrate that our association of interest is significant even after controlling for potential confounders.

Because adding potential confounding variables to our statistical model can help us to gain a deeper understanding of the relationship between variables or lead us to rethink the direction of an association, it is important to learn about statistical tools that will allow us to examine multiple variables simultaneously (i.e. more than two or three).

1. Multiple Regression: The general purpose of multiple regression is to learn more about the relationship between several independent or predictor variables and a quantitative dependent variable. Multiple regression procedures are very widely used in research. In general, this inferential tool allows us to ask (and hopefully answer) the general question “what is the best predictor of…”, and does “third variable a” or “third variable b” confound the relationship between my explanatory and response variable?”

Both multiple regression and logistic regression allow for explanatory variables that are either quantitative, categorical, or both.

After reviewing the material above, take Quiz 11 in Moodle. The reading quizzes will help you to assess your understanding of some of the conceptual content.